After two underwhelming years of solar job contraction in the United States, the solar industry’s employment returned to growth in 2019, thanks to an expansion in U.S. solar installations. 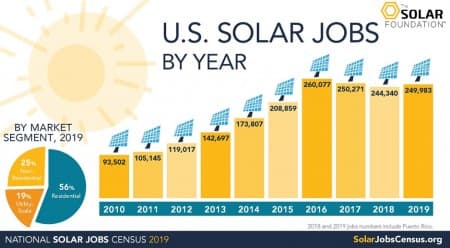 In the five years through 2019, employment in the solar industry jumped by 44 percent, growing five times faster than the overall job growth in the U.S. economy, The Solar Foundation said in its latest report this week.

Solar jobs increased in 31 states in 2019, and growth well outpaced the national average in many emerging solar markets. The state with the most jobs added in 2019 was Florida, followed by Georgia, Utah, New York, Texas, Illinois, and Virginia.

As of 2019, the state with the highest number of jobs in the solar industry was California, followed by Florida, New York, Massachusetts, and Texas.

The job growth last year reflected the expansion of the industry across the U.S., thanks to the declining costs of solar technologies and growing popularity of solar power generation among individuals, businesses, and utilities, The Solar Foundation said.

Around two-thirds of America’s solar jobs are at installation and project development firms, while the rest of the workforce are employed in manufacturing, sales, O&M, and other areas.

The job market in the solar industry is tight, as one-fourth of solar companies found it “very difficult” to hire qualified workforce, The Solar Foundation found in its Solar Jobs Census.

“The solar industry has been one of America’s leading job creators over the past decade, as evidenced by our annual National Solar Jobs Census,” Andrea Luecke, President and Executive Director of The Solar Foundation, said in a statement.

“In just ten years, despite facing many challenges, solar has grown from a niche product to a mainstream energy source that provides a quarter of a million high-quality jobs. This is great news, but it’s only a fraction of what can be accomplished if we are truly committed to solving the climate crisis and expanding the use of solar and storage,” Luecke added.

Commenting on The Solar Foundation report, the U.S. Solar Energy Industries Association (SEIA) said that the U.S. tariffs on imports of solar modules continue to be a drag on job growth, which was only modest in 2019.

“Adding more than 5,000 new jobs is impressive given the policy environment, but we could be leaps and bounds ahead of where we are if it weren’t for trade restrictions,” said Abigail Ross Hopper, president and CEO of SEIA.

The association aims to lead solar power development in the 2020s, which it has dubbed the Solar+ Decade, and has set a goal to have 20 percent of all U.S. electricity generation coming from solar power by 2030.

The solar industry has the potential to become a leading power generation source in the U.S. energy mix because of rapidly declining technology costs which already make solar photovoltaic (PV) one of the most economically competitive generating technologies, the Energy Information Administration said in its Annual Energy Outlook 2020 with projections to 2050.

According to EIA estimates, solar photovoltaic would contribute the most to the growth in renewable power generation, increasing from 13 percent of total renewable generation in 2018 to 46 percent by 2050.

Combined-cycle natural gas power generation and solar photovoltaic will be the most economically competitive generating technologies in terms of levelized cost of electricity (LCOE) by 2025, the EIA said.

“Electricity generation from natural gas and renewables increases as a result of lower natural gas prices and declining costs of solar and wind renewable capacity, making these fuels increasingly competitive,” according to EIA’s outlook.

Silicon Valley-based Northern Electric Power Technology (NEP) has released a new 500-W microinverter. The company is calling it a “macroinverter” since it is able...
Read more
PV News

Department of Energy announces up to $45 million for research to advance solar hardware, systems integration

The U.S. Department of Energy (DOE) announced up to $45 million for research to advance solar hardware and systems integration, including the creation of...
Read more