IRENA found 56% of renewable capacity added last year achieved lower electricity costs than new coal power plants. Furthermore, by the end of 2021 it would be cheaper to build new photovoltaic facilities than to keep running active coal power plants of as much as 1.2 TW, more than half of the world total.

New solar and wind projects are undercutting the cheapest and least sustainable of existing coal-fired plants, the International Renewable Energy Agency, IRENA, said in a study. Auction results show the trends are accelerating, reinforcing the case to phase out coal entirely, it added and attributed the shift to improving technologies, economies of scale, competitive supply chains and growing developer experience.

The trends are accelerating, reinforcing the case to phase out coal entirely, IRENA concludes

Up to 1.2 TW of existing coal-fired capacity will cost more to operate through next year than new utility-scale solar power facilities would cost to install, according to the document. The size exceeds half of the world’s total, industry data show.

Moreover, replacing the costliest 500 GW of coal capacity with solar and wind would cut expenses by as much as USD 23 billion per year and reduce annual carbon dioxide emissions by around 1.8 gigatons or 5% of last year’s overall tally, the research results show.

The agency calculated the move would yield a stimulus worth USD 940 billion or 1% of global gross domestic product. In total, 56% of utility-scale renewable capacity added in 2019 all over the world had lower electricity costs than new coal, authors stressed.

“Installing new renewables increasingly costs less than the cheapest fossil fuels. With or without the health and economic crisis, dirty coal plants were overdue to be consigned to the past. But the cost data presented in this report – compiled from 17,000 real-word projects – confirms how decisively the tables have turned,” said Francesco La Camera, IRENA’s Director-General. 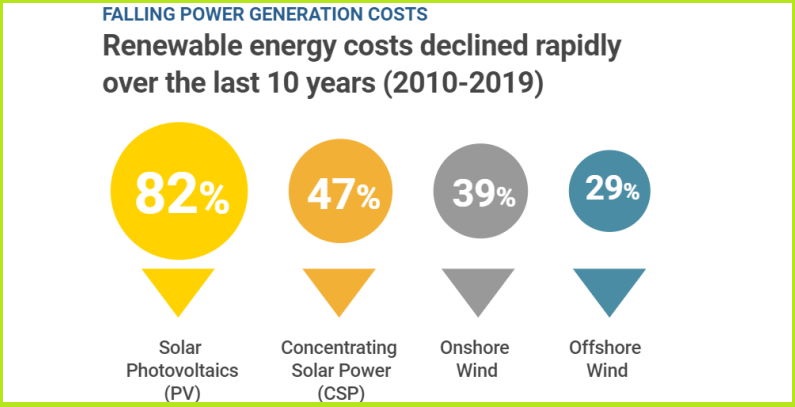 He pointed to the annual drop of 3% to 16% in production expenses for onshore wind and solar technology from 2010 through last year. Record low auction prices for solar PV in the United Arab Emirates, Chile, Ethiopia, Mexico, Peru and Saudi Arabia confirm values as low as USD 30 per MWh are possible, the study reveals.

La Camera: With or without the health and economic crisis, dirty coal plants were overdue to be consigned to the past

The global weighted-average levelized cost of electricity (LCOE) of utility-scale photovoltaics fell 82% between 2010 and 2019, compared to 47% for concentrated solar power – CSP, 39% for onshore wind 29% for offshore wind. The measure includes a real cost of capital of 7.5% in the members of the Organization of Economic Co-operation and Development and China, and 10% in the rest of the world.

Electricity costs in utility-scale solar PV fell the most of the four categories in 2019 alone, 13% to USD 68 per MW