As the world continues to grapple with the worst global pandemic in living memory, economists everywhere are warning that we are witnessing the unraveling of something far grimmer than the 2008 financial crisis: the Great Depression 2.0.

The signs are legion: Unprecedented levels of job and capital destruction, decimated consumer spending, underperformance by nearly all major financial markets, and a breakdown in the world fiscal order.

Even giant economic powerhouses have not been spared, with California–one of the wealthiest states in the United States thanks to its booming tech sector–having obliterated all its job growth over the last decade in just two months.

But now a renewable energy think-tank says directing those stimulus dollars to renewable energy investments could not only help tackle global climate emergency but spur massive economic gains post-Covid-19 for decades to come.

The International Renewable Energy Agency (IRENA)–an organization dedicated to promoting global adoption of renewable energy and facilitating sustainable use–says that it will cost the global economy $95 trillion to help return things to normal.

Investing $110 trillion in renewables could, on the other hand, potentially spur an even more robust economic recovery from COVID-19 by creating massive socioeconomic gains as well as generate savings of $50 trillion-$142 trillion by 2050. 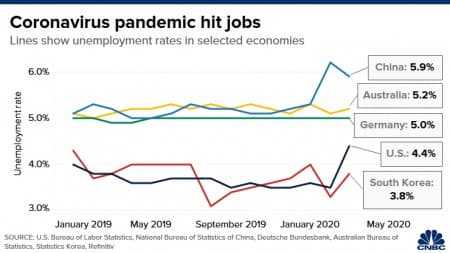 The big question is: Will the world’s governments be willing to put their money where their mouths are?

A Deluge of New Jobs

IRENA alleges that channeling all those stimulus dollars into the renewable energy sector would grow global GDP about 2.4 percentage points faster than the currently recommended scheme and spur a 13.5% increase in global welfare indicators such as education and health.

But here’s the kicker: investing that amount of money in renewables could quadruple the number of jobs in the sector to 42 million as well as create tens of millions more in related industries. In other words, it could easily create more than double the 26 million jobs that the United States has so far lost to the pandemic.

IRENA director-general Francesco La Camera says COVID-19 has “…exposed deeply embedded vulnerabilities of the current system…” notably the fossil fuel sector which is finding itself in dire straits due to an epic collapse in demand amid a global lockdown. Francesco has opined that the world needs more than a kickstart and that accelerating renewables can potentially achieve multiple economic and social objectives that would help build a more resilient economy.

Beyond 2050 and over the long-term, the report identifies investments in ‘five key pillars of decarbonization,’ namely electrification, renewable energy generation, system flexibility, green hydrogen, and innovation–as being necessary for the achievement of a near- or zero-carbon global economy.

Not surprisingly, the renewable energy sector has lauded the report, with Ignacio Galán, CEO of Spanish power company Iberdrola, saying aligning economic stimulus with climate goals is crucial in enhancing the long-term viability of the global economy.

A previous report by the IEA aired pretty much similar views, with IEA executive director Fatih Birol saying some of the stimulus packages being rolled out by governments should be invested in the renewables sector:

“We have an important window of opportunity. Major economies around the world are preparing stimulus packages. A well-designed stimulus package could offer economic benefits and facilitate a turnover of energy capital which will have huge benefits for the clean energy transition,” he said.

The IRENA report has also come in for some panning, with Charles Donovan, executive director of the Centre for Climate Finance and Investment at Imperial College London, saying its long on facts and figures but short on actionable interventions that governments can undertake right now to bend the carbon emissions curve.

But what are the chances that IRENA’s ambitious ‘Transforming Energy Scenario’ that aims to lower global CO2 emissions by 70% by 2050 through channeling stimulus dollars into clean energy will see the light of day?

The report has already sounded a warning on the “widening gap between rhetoric and action” by governments regarding climate change.

In a past article, we reported that whereas COVID-19 has resulted in a significant reduction in CO2 emissions due to travel restrictions and depressed economic and manufacturing activity, it will end up being far more inimical to the sector.

The IEA has warned that governments are likely to deeply scale back on clean energy investments, with the current year set to record the first fall in solar energy growth in nearly four decades.

Meanwhile, EV sales are expected to come to a standstill for the first time in more than a decade as well as trigger a dramatic reversal in the incremental shift away from coal-fired power plants.

The unfortunate fact is that whereas governments everywhere have been paying lip service to climate change and clean energy, in reality, they are wont to go to much greater lengths to try and save the fossil fuel sector from collapse than invest in clean energy projects with much longer and unproven paybacks.